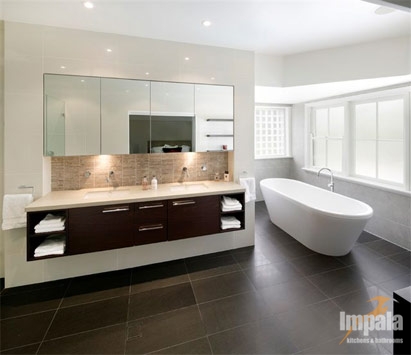 Our client purchased a large 90’s master built home in Sydney’s north west. The client did not wish to make substantial changes to the home, just update finishes and improve small functional design aspects to their bathrooms. Impala had already designed and built the kitchen and was now briefed to design and renovate two bathrooms and a powder room. The clients were two adults with two small children. Practicality and aesthetics were the main points in the client brief. The client wanted the bathrooms to meet their storage requirements and bathing needs. 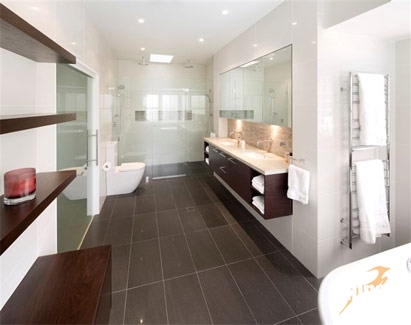 The ensuite bathroom needed to cater for two adults in the mornings and also allow for luxury bathing when time allowed. A large freestanding bath tub was to be a feature. Some feature tiles were requested, however the client did not want mosaics, fearing they will date. Natural stone tiles in small pieces were selected to be used as features in niches. Practical dark porcelain floor tiles were selected and clean, crisp white tiles on the walls. 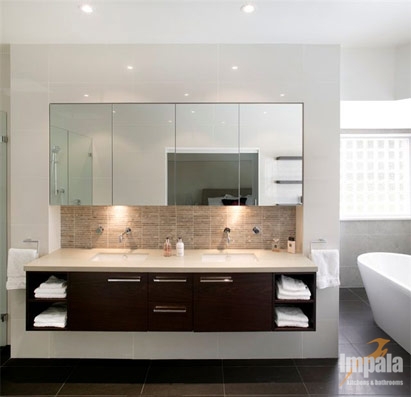 A back to wall toilet, flick mixers and lighting were all important inclusions. A frameless shower screen with a double shower at either end and ceiling roses were also in the client brief. Impala installed downlights in the ceiling and under the shaving cabinet to allow for task and ambient lighting. 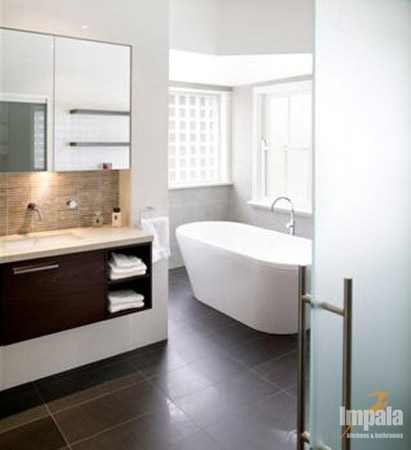 The joinery was to be functional but also striking in appearance. Impala designed and built a floating timber veneer vanity and recessed shaving cabinets. Constructed out of satin timber veneer, and polished edge mirrors, the joinery allows for ample, practical storage.

The double entry doors to the ensuite were awkward. The old doors were hinged and often in the way. The client was not keen on standard cavity sliding doors which are often boring and too plain. To eliminate this problem, Impala custom made frosted sliding glass doors which recess into the wall cavity as shown in the image.