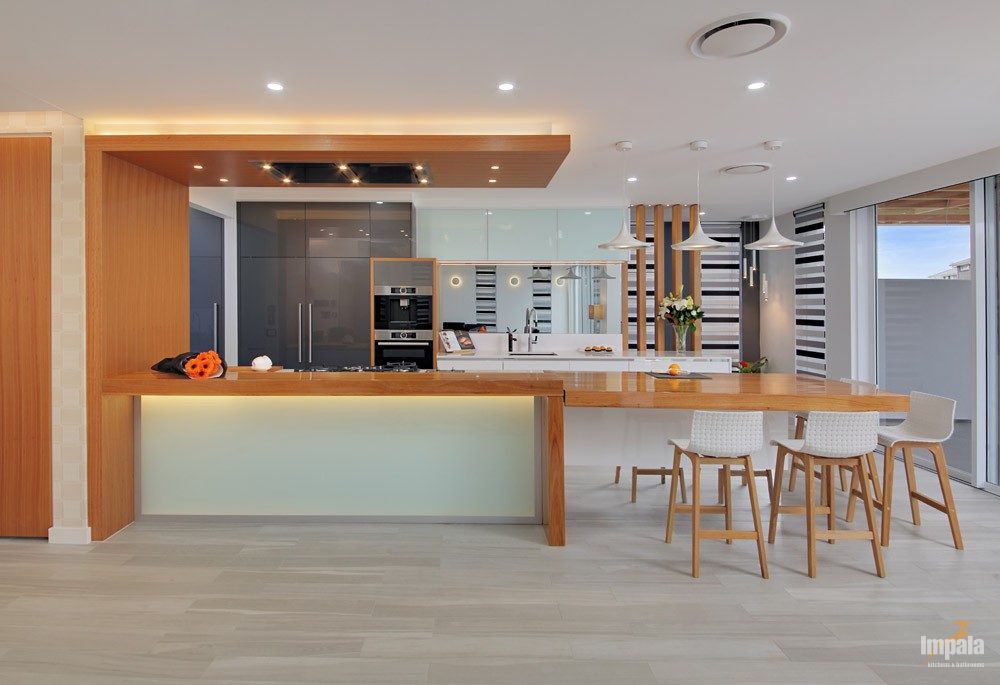 Impala’s design brief from this client was to design an efficient kitchen with modern sophistication and mixed materials. Apart from this over-riding consideration, there were a few other important facets to the design brief.

The layout of the kitchen was designed to allow for easy cooking. The kitchen showcases an efficient work triangle, there are set down and work areas next to all major appliances. The eating area is directly adjacent to the cooking zone as per the client’s request and design brief. The cooking area is in close proximity to storage to allow the cook to face his guests while cooking and preparing a meal. The timber bench top can be lowered or raised to suit the functional need – seating, servery or additional bench space for food preparation.

The coffee machine and steam oven are both placed near the sink for water access and ample set down area in between for practical use.The microwave was placed lower, as through consultation with the client, it was understood this appliance was not used often.

The client liked the use of strong accent colours. To this end Blackbutt timber veneer was used to give strong outlines. The Charcoal grey gloss has been used as a solid block between the butler’s pantry and the main kitchen. The gloss white doors and bench top were chosen as a neutral base for the colour palette.

Both task and accent lighting has been used extensively. In the soffit (flyover), LED spotlights were chosen to match the lights in the adjacent rangehood appliance. Over the sink area LED strips have been used to give task lighting. They are positioned in front of the sink/bench user to remove any shadowing. Backlit glass was used on the barback to provide accent lighting (a soft glow).

The under-stair cabinets were not in the original house plans, but were suggested by the kitchen designer and incorporated so entry can be gained from the kitchen for additional storage area.

The kitchen is the central hub of this home and has a great visual impact upon entering the home as well as meeting the client’s brief. The client is very proud of his kitchen.